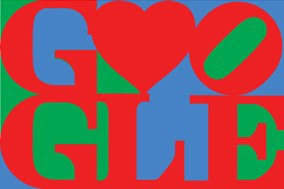 ~This is the happiest thing about Valentine's Day! What can I say, I'm a stamp geek, Google's avatar, of course, being a spin off of Robert Indiana's classic 1973 8c stamp.
Posted by erin at 7:55 AM 1 comment: Links to this post

Today is a waiting room. I'm waiting on an appointment, with whom I'm not too sure. Well--that is, this expectant feeling can be chalked up to: a reply to a request for some advice that will lead to radical financial changes; a reply from IT saying they're coming to fix my monitor that is determined to display everything as if it were Super Mario Bros, circa 1989; an extra pair of hands to help me over the next step in this project; a student worker so that I have someone else to talk to. All of these things may or may not happen today, so I'll meet them again when I walk through this door tomorrow. Known waiting, known response.

At home, I'll walk into another waiting room. But there I'm less certain of what it will be for. For a phone call? A half-finished project or a half-read book? Enlightenment? Visitors? The exact dinner I want? My intuition--the indwelling of the Holy Spirit?--insists on "Wait. Wait." Wait? When I want to run on and meet whatever is coming. When I know I'm not, mysteriously, equipped for it.
Posted by erin at 11:55 AM 1 comment: Links to this post

Labels: that is not it at all

Migraine Puts on Her Happy Face

Today has just about been too much. My patience, my understanding, my tolerance, my sanity. At the breaking point. What is wrong with me? Tonight, I'm going to church, and I'm going to read stories to some precious little 3 and 4 yo souls, and we're going to sing about how much God loves us. The end.
Posted by erin at 2:31 PM No comments: Links to this post

One day, I'll be able to put both of my hands around all of this. I'll be able to lift it up as one piece, set it aside, and reveal the world that was always happening underneath.
Posted by erin at 3:26 PM No comments: Links to this post

These shall be mine, and I will call them manna.

Spoiler Alert: Cupcakes are now being served at people's weddings as the cool thing to do.

Last winter, two friends of mine got married in an event that was low on frills and rich in love. Being generally behind the rest of the world when it comes to the wedding scene, I found that cupcakes are "the thing" these days, but this was my first time to see it in action. And I was...hm. Well. Cupcakes present many benefits that a traditional cake doesn't, namely, you don't have to wrangle up someone to "honor" by asking them to "serve" it. You can save valuable time by not having to "train" someone on how to exactly put 8 layers of off-center hearts onto 450 plates with equality. And, and! They asked our minister's wife to make them. I had heard tell of Becky's raspberry mint cupcakes, but it just didn't sound right. Since February 2009, I've been dreaming of them. I finally decided 'twas time to locate a recipe.

I chose this one from The Cupcake Blog. I suggest you make them as well. Every time someone makes these, an angel gets its wings.

Win Some: Oh my word. My craving has been satisfied. The basic vanilla cupcake shall forevermore be the starter for all my cupcake efforts.
Learn Some: Why in the world does this involve gelatin in any form? Imagine jello mixed with whipped cream, and what do you have? That's right: elementary school cafeteria. Won't. Do. That. Again. Oh. And I'll chop the mint finer.

In sleepier news, I'm reading a lot. Finished all of the Stieg Larsson books. Reviews posted soon at Think Journal.

Cheers!
Posted by erin at 2:49 PM 2 comments: Links to this post

Transcendence comes walking, galumphing, swimming. It whispers, screams, stands silent. It's red, purple, grey. It is sandy, silky, sickly, robust. It sinks while floating. Today we sang a song in church that had that feeling. The line was "Lest I forget thy love for me..." The altos ascend in pitch while every other part descends. Rare, that approach. But, oh, so right.
Posted by erin at 1:40 PM No comments: Links to this post

Labels: but what does it all mean, happymaking, Longinus would be so proud
Older Posts Home
Subscribe to: Posts (Atom)

You were going to drink coffee anyway...